A few months ago when stocking up on strings (I'm sorry Local Music Shop, but I buy my strings online, because I always get exactly what I want and it is half the price even with delivery) I noticed my normal string of choice - D'Addario EJ45 - now come in a "Carbon" version. I finally wound them on and observed a few points: 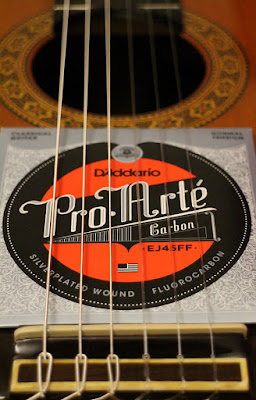 I played a few long gigs on this set of strings which deadened them quicker than if they were just in a practise rotation.  So the dynacore basses have a slightly better tone than the standard basses, and the tone hangs in there a little bit longer.  The carbon trebles have a nice bright tone that lasts but over time I found I disliked the thinner strings.  Will I use them again?  No, but in the future I will try the "dynacore" and the EXP coated sets. There's a web page showing all the D'Addario string variants here http://www.daddario.com/DADProductsClassical.Page

[1] No classical guitar ever holds its tune. Just you holding the guitar for a few minutes is enough to put a bit of body heat into it which changes the tuning...which you re-tune compensate...and then when done pack away...and then next time it is out of tune again because it is cold again...