Although I arranged this a year ago, I hadn't got around to recording it.  In fact I hadn't recorded anything for nearly a year.  Partly because it takes me several hours, and partly because there isn't much need for more guitar videos in the world.  I feel like my music comes across better live, so I prefer to share my songs at gigs these days.

I have a few songs to record yet but this one decided to come out.  It's 1985 Rob Hubbard, nah, not the scientology bloke, the music composer.  My favourite of his is "Monty on the Run" but that is too much to take on.  This piece however, which was used in Command High Score and another that I can't remember, was somewhat simpler.  The SID chip it was composed for used three instruments, a bassline, a looping middle rhythm part and the melody.  I tried a few ways to put the middle into it but it never quite sounded right.  So I left it as a simpler bass and melody.

To keep video recording simple I zoom in on the guitar and keep me out of the picture.  I use my trusty Zoom H1 condenser microphone for the audio.  My DSLR camera is not easy to self-record but I don't think any are - well at least not the ones that have a backscreen that can't flip forward. So if you can't frame yourself, and set your focus, what do you do?  After much scouring of the internet to come up with a solution, I still simply use a mirror behind the camera.

So as you can see in the photo below, I've got the camera on a tripod with a mirror on another tripod behind it, and on the bottom left the microphone.  Standard deal - take video and audio separately, synchronise by eye and ear, tweak the audio EQ and the colour saturation, add a logo, job done. 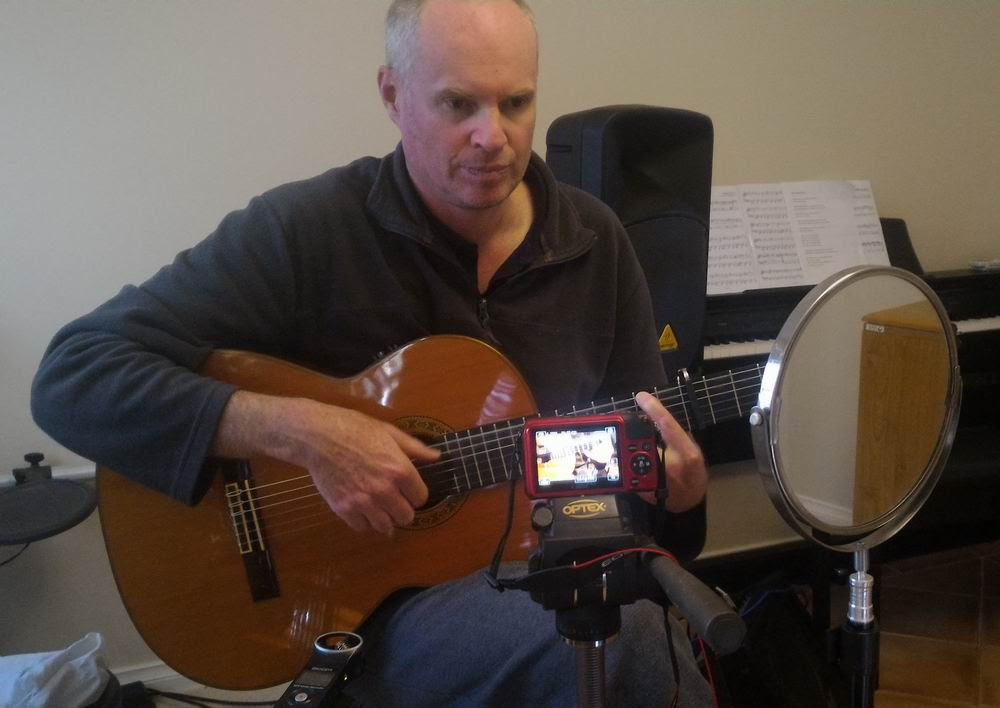 I've played at South Beach Tacos in Fremantle twice now which has been a good experience.  Fremantle has more, for want of a better term, "hipsters", who as a complete generalisation get more into live music.  So in playing my stuff I get more connection with the audience, which inspires my "A game" which is good for everyone! I take  my active speaker, a stand for it, power cable, lead and guitar.  Minimal - though the speaker is heavy so I put it on a trolley if I'm going to be walking for a bit.  I sit with the speaker partially behind me so I can hear what is coming out of it, I play better when I'm playing to the sound that we are all hearing.

Speaking of playing to the sound you are producing, I played at my mate Shaun's new open mic at The Windsor in South Perth.  Shaun provides the sound system, you just plug in.  He's got a few speakers on poles directed at the crowd, and a big sub, and a foldback speaker for you, all through a mixer. Which is a pretty standard thing to do from what I've seen.  The problem being the foldback was giving a sound hard to play off; I felt that some notes were resonating, the bass wasn't coming through properly, the crowd was loud, etc etc.  They told me afterwards it sounded great, I guess it's just something I will have to learn. When I'm playing I'm very much playing off what I hear from the guitar, so if what I'm hearing is not a good indication of what is actually happening then I'm distorting what I'm doing to "fix" it.  I'm not sure if I'm making any sense...well picture playing the guitar with 100% block out earmuffs on.  Sure I'd be playing the right chords and all that, but I would be losing subtlety.  In the engineering game we call that open loop, as compared to adjusting for feedback which is closed loop.

Maybe I should record myself playing closed loop (playing to what I'm hearing) and playing open loop (playing without hearing what you are playing) and see if there is any difference.  Ha.

While there, I had an interesting conversation with a professional gigging musician who answered some of my questions with his insights. For example, I said "Good on cafe owners for getting me in to play live music, but I'm not attracting more business, how are they getting value?"  He said "When venues ask how many people I'm going to bring to a gig, I say 'zero'.  This isn't the 80's anymore, it's not about bringing a crowd with you. But what I do give is a better experience to the people there.  I'll turn somebody who might not come back for 6 months into someone who will come back in two weeks.  Someone will buy another cup of coffee or a beer or a bottle of wine a listen a bit longer.  That's the value I'm offering to the venue."

He waxed philosophically for quite some time further, my brain popped, I should have been taking notes :-)
Posted by JAW on Friday, May 12, 2017 No comments: