A family friend asked if I could give her some advice on getting guitar lessons for for twin twelve year old girls. This turned into I will buy everything they need and start teaching them. Which I'm fine with, I haven't had a student in years. Classical guitar teaching, of course, not that I play classical style, but I'm very founded in the ways of classical guitar.

I'm sure to blog more about teaching again, but for now, I wanted to find two classical guitars on a budget. 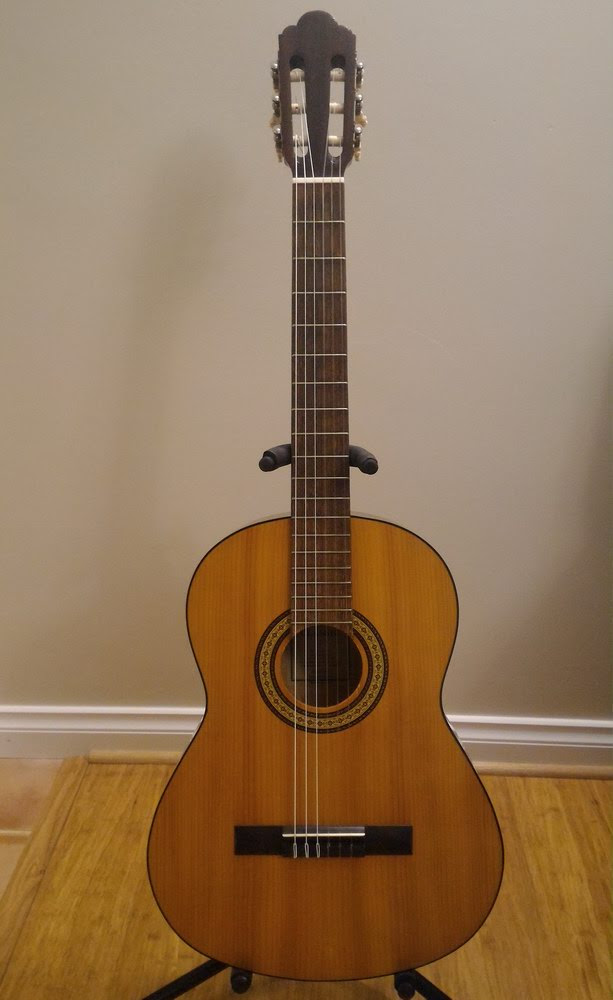 I've discussed before that I'm much keener on secondhand guitars over brand new budget guitars. Older guitars built back in the days when they were still raping the rain-forests for choice woods, and where the guitar has mellowed with age. Of course I'm glad the rain-forests are being protected now, don't get me wrong, but dollar for dollar I'm sure that your money is better spent in an older secondhand guitar. Perhaps modern day Chinese mass production factories get much better build tolerances, but we've known how to make great guitars long before mechanisation was a thing so It's not like a modern guitar is automatically better.

I purchased the first one which I thought was an exceptionally amazing piece of history – made in East Germany during the 80’s! Yep, a genuine socialist-made behind-the-wall guitar! The cheap fretboard wood must have been in a dry environment for too long, was showing a lot of superficial cracking but nothing to stop it from being playable. Was also missing 3 strings so I could only go by observation and intuition. I had already done a quick google before heading off to see it and it was basically a student level guitar, "Musima 130 Euro Classic", so even at the time it was not a fancy one, but probably sounded better than a brand new student level guitar. $140 plus a carry bag, a bit more than I wanted to pay, but, eh, I was there.

I cleaned it up, restrung it, started playing some rock’n’roll on it – “How you like that frauline? Das ist gut? Bet you’ve never heard anything that before, ya?” It played easily, so good for a student, but sounded kinda flat and dull. So, very East German. (Yeah, okay, a complete stereotype based on nothing but American movies).

After I had been playing it for around an hour to stretch the strings in, I was sure that it had “opened up” and was sounding a little bit brighter. Perhaps I was getting used to the dull sound but no, I’m quite sure Frauline was indeed brightening up. 30 year later - another part of East Germany reunified.

The next guitar I've lined up to look at next week is a mid 90's Yamaha mid-range classical. I'm a fan of Yamaha classical guitars - so long as it's not a C40 - which is in the class of Chinese mass produced student guitars I mentioned earlier :-)