Out of the 17 people that got back this is how the votes came in:
So it would seem that D'Addario rules the street. Unfortunately I forgot to add "Other" as an option (smacks forehead), once a poll is underway you can't change it. The list was compiled from best sellers info on the internet.

I will throw a set of Savarez on sometime though, that still nearly a quarter of all respondents, see what they are like.

Interesting, informative, thanks all!
JAW
Posted by JAW on Friday, February 16, 2018 No comments:

I've got my youngest daughter on a secondhand cheap 3/4 cello. The bridge had warped, and it started falling over from time to time. Getting a new bridge fitted by a music shop was going to be maybe half the value of the cello, and besides, getting someone else to do the job isn't very JAW-like, so I took on the job myself.

Some internet search revealed that you could straighten a warped bridge by steaming over a stove for a long time, clamping back in a straight position, and letting it dry. I called that Plan B. Plan A was to buy a bridge blank and carve it to the right shape.

You can source cured/dried Maple machined bridge blanks from China (Ebay) for next to nothing, I had 4 delivered for $AUD13(2017). The slow boat from China to Australia is around 3 weeks, so you have to plan ahead. I figured 4 should be enough, gives me the chance to break 3 first :-) 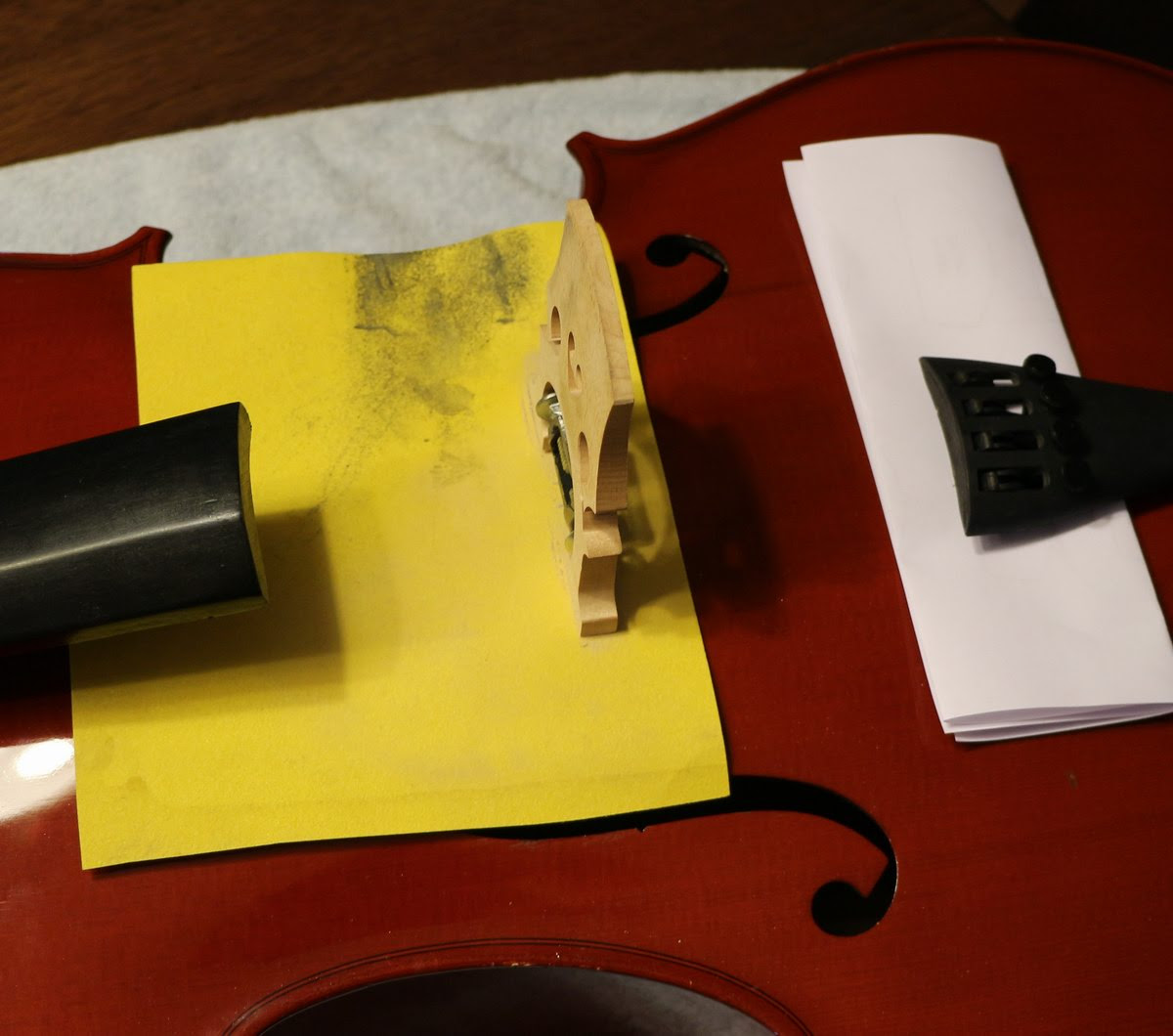 Sally over at https://trianglestrings.com/newcellobridge/ gets two thumbs up for her very thorough tutorial of how to do it. From her many pictures and discussion you can tell she's an experienced craftswoman, whereas I'm an engineer, so I simplified things a bit. There's no point in me recreating her tutorial, go check it out, I'm just going to talk about the different hacks I used, given that I have only basic tools, a modicum of handworking skills, and some basic understanding of what we are trying to achieve.

First up, to get the feet of the bridge to mate to the face of the cello, I used sandpaper. Place sandpaper on the face, hold the bridge on sandpaper, move slightly back and forward in the area the bridge will stand. This seems very sensible to me, rather than carving the feet to attempt to match the face and constantly checking how you are going.

A leg spreader may or may not be absoltely necessary. I made one out of some bolts and scrap metal with my arc welder and angle grinder. When fitted, the pressure of the strings will push the bridge legs outwards, so pre-spread the legs by around 2mm, sand the feet to mate to the face while spread, then when it's all back together the feet will be a perfect match to the face. I don't think this is really really necessary, I think it is better to do it, but I think you'd be fine without spreading. One of the main reasons I made it is so I could show it to my wife and say "Normally you'd just use a bottle of wine..." 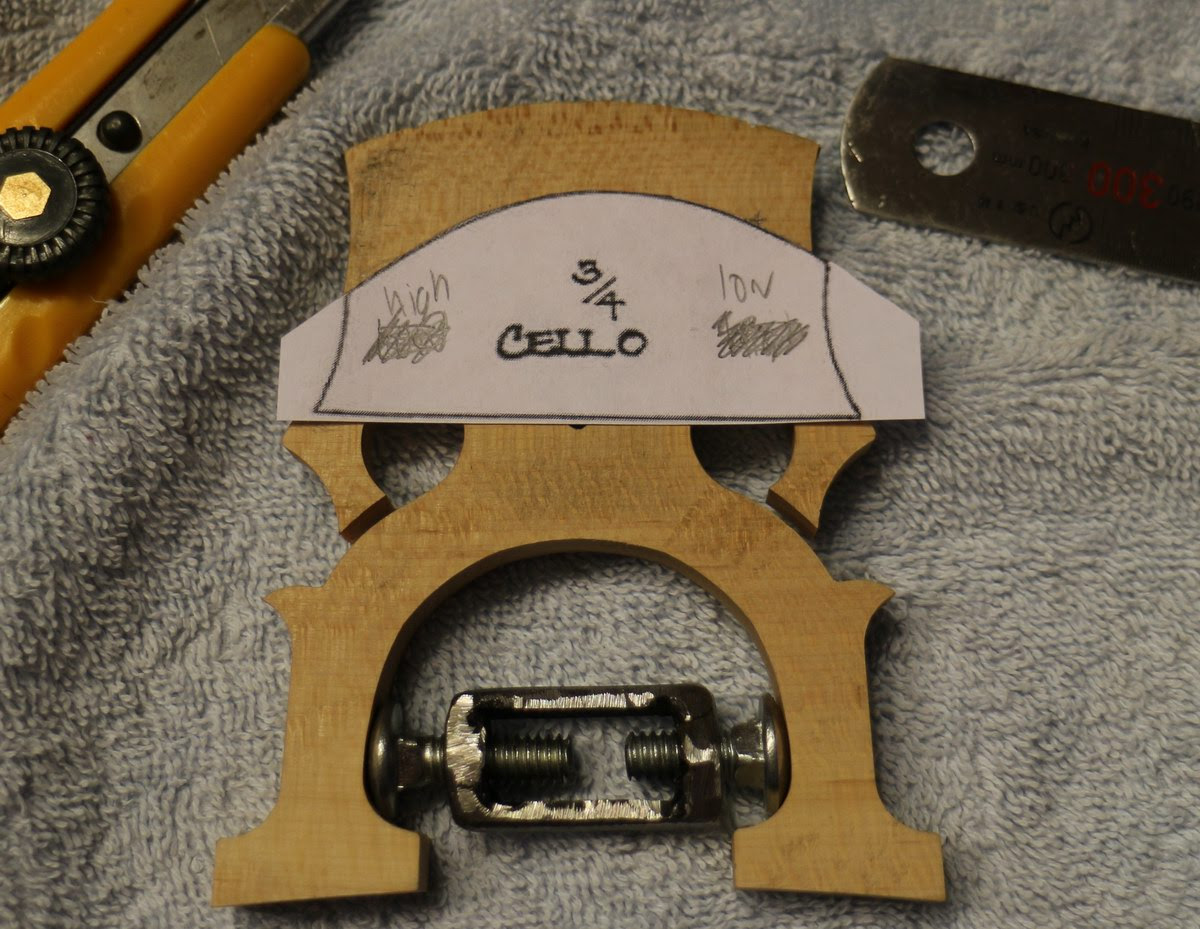 The bridge comes as a blank, you need to remove wood until it is the right shape. Proper luthiers carve carve carve the bridge to shape using knives, planes, chisels. I had a crack. Dried Maple is harder wood than you'd think. My knives, planes and chisels are not top quality, it was hard going. However, angle grinder and die grinder loaded with sanding disks make it really easy going. You can find the dimensions for the right shape with internet searches, but some depend on the installation.

For instance I particularly liked Sally's approach of first getting the feet fitted to the face, installing the bridge straight away although waaay to high, putting the strings roughly in place, measuring the string height at the end of the fretboard, subtracting that from the desired string height, placing a template on the bridge in that position, and cutting off the excess with a jigsaw. Genius.

I fitted the bridge several times, sanded it down some more to get the string heights rights, it was tedious. The last time I took too much off on the high string, I was impatient. Moral there is don't be conservative to start with, because you will get annoyed and be less conservative to end with and stuff it up. Measure twice, cut once. I ended up having to glue a small piece of wood back on. Don't do that. 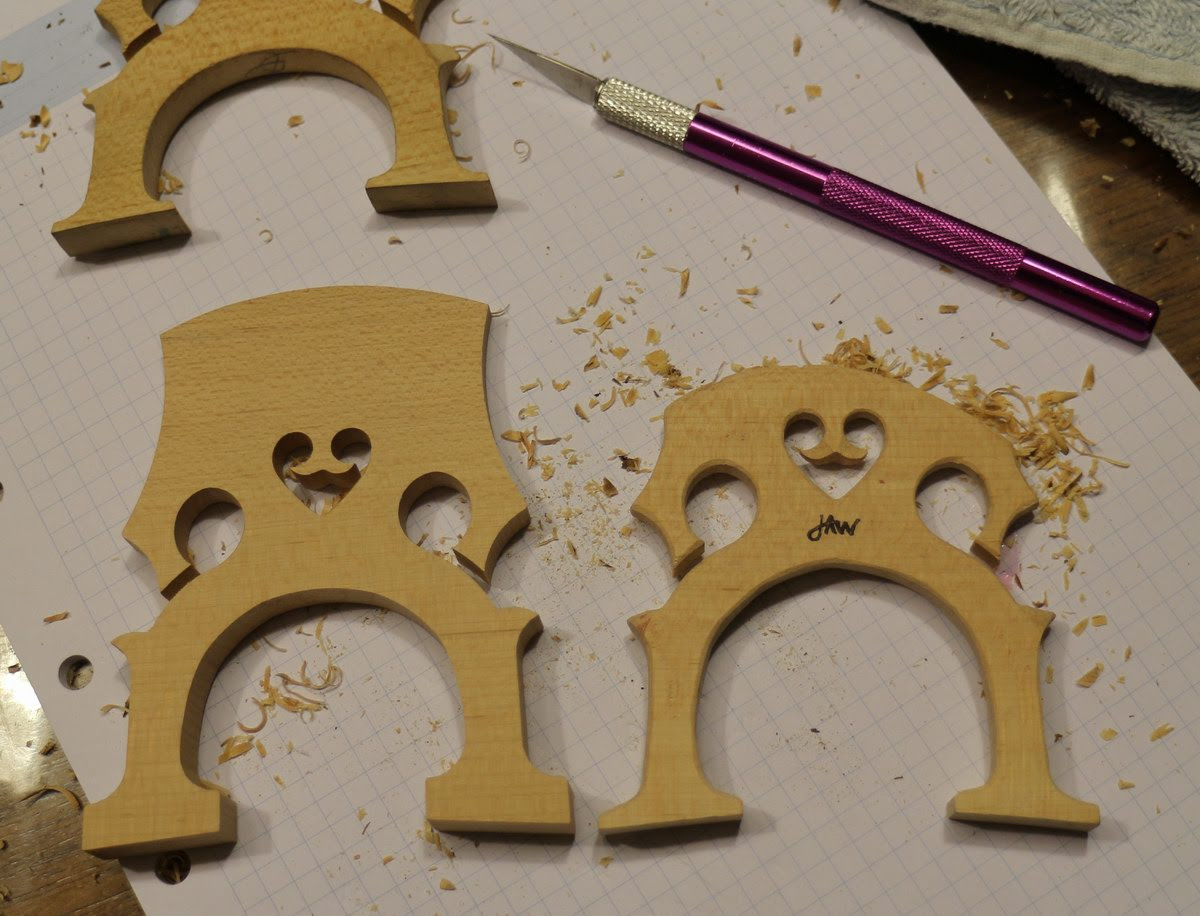 Another good tip I found on the internet was rather than gluing some parchment on the top where the strings go - or doing nothing at all - just put a dob of superglue there and let it soak in. It dries rock hard, strings slip past it nicely and won't cut into the wood.

I fancied up the look with a knife, took the excess wood out with my die grinder and wrote my initials on it, you can see the difference between the blank and my finished product in this photo. It took me the better part of a day from start to finish, but I learnt a lot. I would imagine if I ever had to make another it would take me around 2 hours.

Another skill added to the list. Don't be afraid to try it if you are in the same predicament as me - and violins, violas, cellos and double basses are all similar. Read Sally's tutorial, watch a few youtube videos, and use some of the hacks I mentioned here. Good luck out there!
Posted by JAW on Saturday, February 03, 2018 3 comments: