Fingerstyle of the Moon progress 2017

I haven't been gigging recently (slowly going rusty) but it has turned my head back to arranging. After my recent other pop/rock songs (The Angels, some Cream and even Van Halen), I've gone back to my old friends Pink Floyd.

Some of my internet mates know that I've been working on a fingerstyle cover of the whole album "Dark Side of the Moon" for longer than a care to mention, with no real update since 2014.  I've further enhanced "Breathe", gone backwards on "Any Colour You Like" and "Great Gig in the Sky", the rest are largely the same. I decided to sit down and play them all back to back for the camera, even though some aren't finished.  But most importantly, I have begun documenting the work in MuseScore.  Only scatterings of tabs currently exist, it's mostly in my head.  One day I'd like to have a book/video.  There is a good chance that will never happen, but if all the songs are documented then it wasn't all a waste of time :-)

Se here you go.  I messed up quite a few times; it is hard to play continously for 19 minutes without bungles.  Much of the work isn't yet done.  But that's why this is a "progress" video, not a "complete, done and dusted" video.

0:00 Speak to me.  JAW can tap the guitar body!
0:10 Breathe.  More freestyled now than just fingerpicked. Now features intro solo with an "innovative technique" I'm still trying to master, check it at 1:08
3:02 Time.  Forgot what I was doing, pretty awful play through, I normally do a lot better. Sorry.
6:19 Breathe Reprise.
7:25 Great Gig in the Sky.  Only the intro, been too long since I played the vocal part I didn't attempt.
8:36 Money.  Still in progress, I need to make it more interesting than just the verse/chorus.
10:36 Us and Them. I can normally make the detuning to Drop D fit in nicer, and get it a bit more accurate.  The pressure of the video camera.
13:40 Any Colour You Like.  Forgot what I was doing again, this needs a lot of work, I almost shouldn't include it.  "Progress".
14:55 Brain Damage. Occasional brain fart.
17:50 Eclipse.

If you make it to the end here, have this kudos ribbon, and pop on a comment letting me know which bits didn't work for you (I have broad shoulders).  Thanks!

This seems like a simple idea, like it's just about degrees of laziness, but until a student finds the deeper love and want to play guitar (indeed for anything that requires time and effort to achieve a goal) - then you have to remove blockers. Such as taking your guitar out of its bag after coming back from a lesson, that alone can block a student from practising.

(Learning something that is hard, that takes a long time, that takes a lot of work, that can be frustrating - it's a important undertaking more so than ever in our world of instant gratification. It's this good stuff that lasts and doesn't come easy, that's the stuff worth doing.) 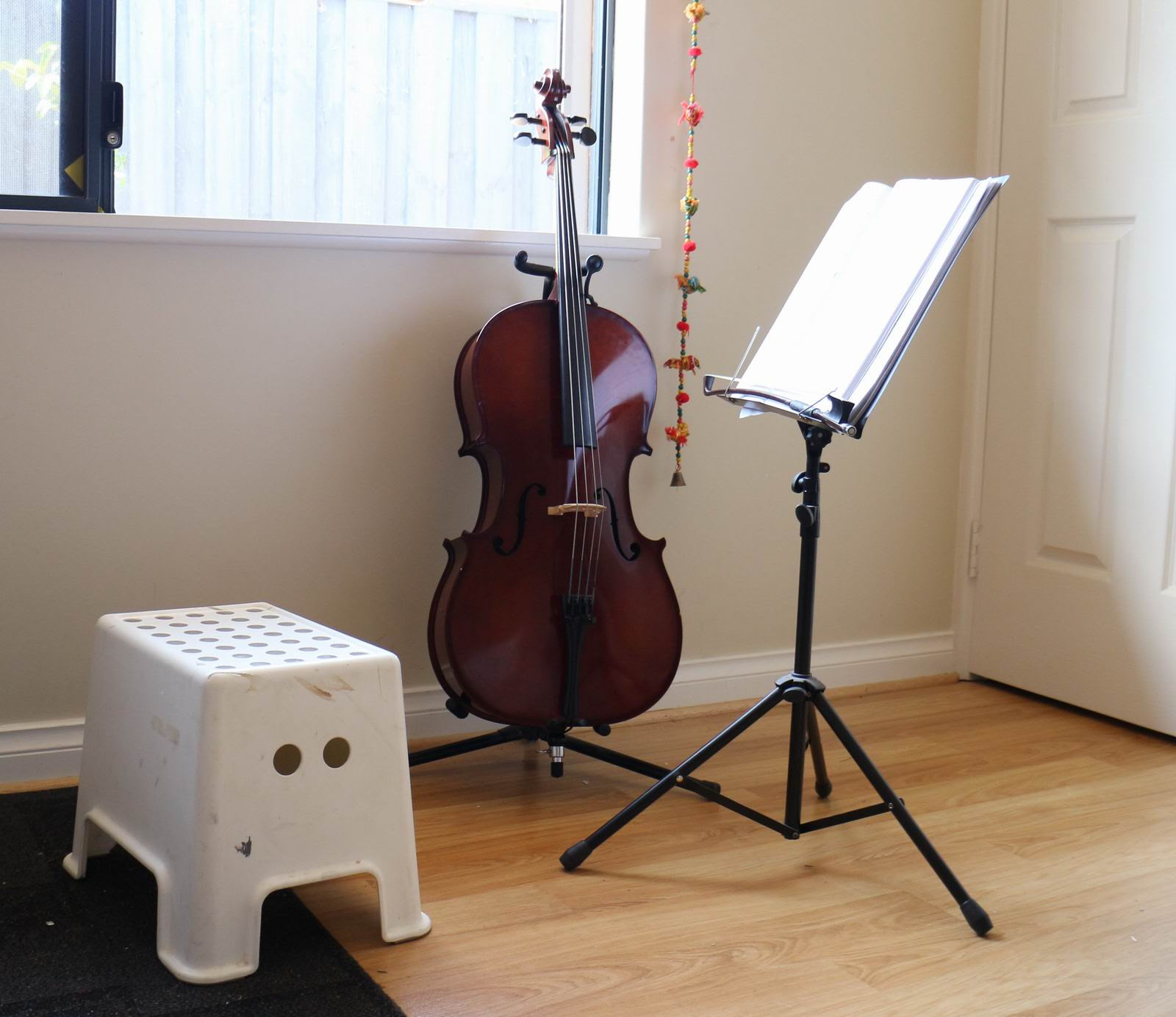 I'm calling that the second most important thing to buy after you buy your instrument is a stand to put it on. They are so cheap too! I bought a heap of instrument stands for around $AUD15 online delivered to my door, and everyone in my house learning an instrument got one.

So at any time, the instrument is right there, and they can pick it up and play. Even 5 minutes a day gets those neurons synapsing and creates new behaviour.

Do it. Instrument stand. My youngest daughter is learning the cello and look it's right there in her room, waiting for her, at all times. And it's made a difference, she plays it regularly, often without prompting!

Now there are other options for easy access to your instrument. It's great to have one guitar on a stand somewhere handy, but when there are say 4 of them gathered into a room they take up a lot of space. I switched to wall mounting instruments, again, easily sourced online and very cheap. My wife likes the "look", they are still easy access, and the best part is you get floor space back. And how nice is it to sit in a calming room full of instruments. Good if you have an available room that is! 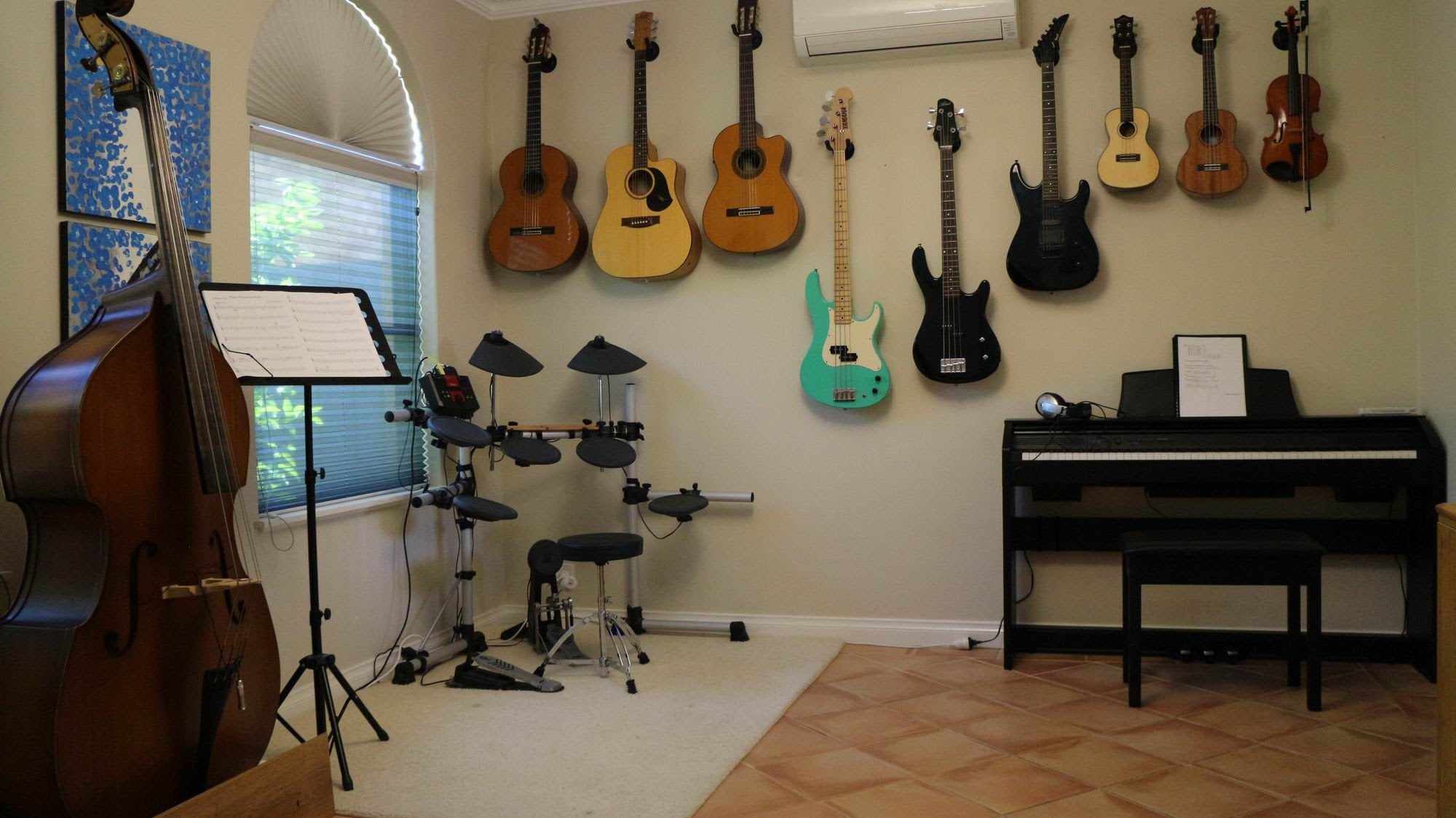