Ah YouTube, what a great platform. It has greatly helped my guitar enthusiasm and performance. Without it, I would probably still be like I was during my twenties - maybe play a few hours a month, when I could be bothered. If you aren't playing regularly for a reason - that is, for an audience, could be a gig, church, guitar teacher, something that forces you to play and practise regularly - then YouTube can fill that space.

I first posted a video on YouTube as part of a discussion on a forum about fingerstyle guitar. A guy inspired me to record a video. But how was I going to send a video - too big for email, too tedious with ftp! He said "Use that new YouTube thing". I'd never heard of it, it had only been around for nearly a year when I created an account.

It wasn't until Sept 2007 that they started recording proper statistics. I do love a good statistic. Here is a simplified lifetime statistic for my Jawmunji channel: 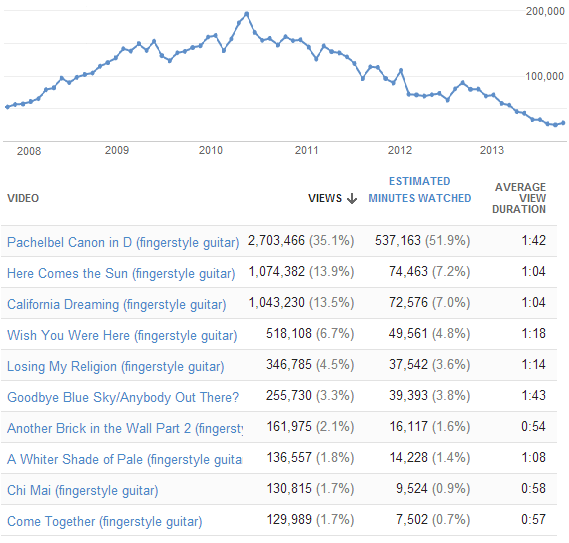 But the graph shows a rise and fall. Currently I'm down to half of the views from where I started; and at 10% of my peak, and it looks like it is continuing to fall. Why? I have a few ideas:

Getting views was never a big driver for me; I have watched it increase and decrease over the years with fascination, but the reality is that the conversations I have with just a few people are far more valuable to me than thousands of silent views. I did "monetise" my videos a while back, and I kind of regret it now. For the $20 a month I get, it's not worth making people watch advertising to see it. Too late now, I can't go back.

It's been an interesting project, and one that I will continue. I've got several songs I'm planning to record soon, watch this space.

I'm not exactly sure why I wrote article, perhaps it's just my love for statistics, and analysis of them :) But if you had ever wondered how my Jawmunji YouTube stats went over the years, now you know!