I got a bit excited in June and re-recorded a few songs for my main youtube channel. Over the years I have recorded videos using different cameras, audio capture techniques, framing...my ideas of what people want to see changes, but I've always wanted the highest quality video and audio. Since I'm cheap/tight I've never really spent the big bucks required for high quality, but the tech has been in place for quite some time to enable good quality. For several years I have collected what I needed...and kept working on my videography.

For some time I thought that people wanted to see the whole of the subject framed, "who is this person I'm listening too?" But since I don't get many views on youtube anymore, and most people who look now are guitarists, they are more interested in seeing what my fingers are doing.  So I now mostly frame closeups. My personal favourite closeup is looking down the neck from the headstock, "guitar cam" style. I have two mirrorless DSLRs, when you frame a closeup you introduce a depth of field, so you can tradeoff focus primarily at the left hand or right hand. Depth of field makes the video "look fancy" but really, people want to see clearly what is going on. To do that, you need to adjust the f-stop, but then you are letting less light in, so the ISO will go up and makes the picture noisier. I deal with this by introducing a lot of light, and forcing the focus mostly near my left hand but a bit further out so the right hand isn't a blur.

Since I have two of these cameras, I have the option for a second vantage point. Right hand looking up at left hand isn't a good angle, so I opt for a tightish front on, framed at the extents of my left and right hands.

Really, the difficulty in getting an asthetically pleasing video increases as the quality of the equipment you are using increases!

Audio I started using a stereo condenser microphone years ago and haven't looked back.  I'm using the budget end "Zoom Handy H1", I'm sure the higher end ones do a better job, but the H1 is really quite good.

But just as important, if you want to chop between camera angles you need a bit of software that keeps it easy. For years I used Virtualdub, one video feed, all one take no cuts, and resynchronised the audio feed from the microphone, with the EQ tweaked a bit.  Now I use PowerDirector (I have tried several video editing programs over the years, this one suits my style the best, it's not exactly what I want, but it's closer than the others). I can synchronise the two video feeds and the audio feed quite easily, and chop between the cameras for effect. It's still much easier if I play through a song in one take, but if I get halfway through and muff it, then play out the end, ie, do the song in two parts, it's not too hard to work that.  More than two parts, nup, too hard, easier to replay the song and get it right :-)

Anyway, 5 videos released this month which would be a record, 2 never seen before though. And here's what my setup positioning looks like - it's hard to have bright lights angled so that I don't have killer reflections on the guitar from both cameras! 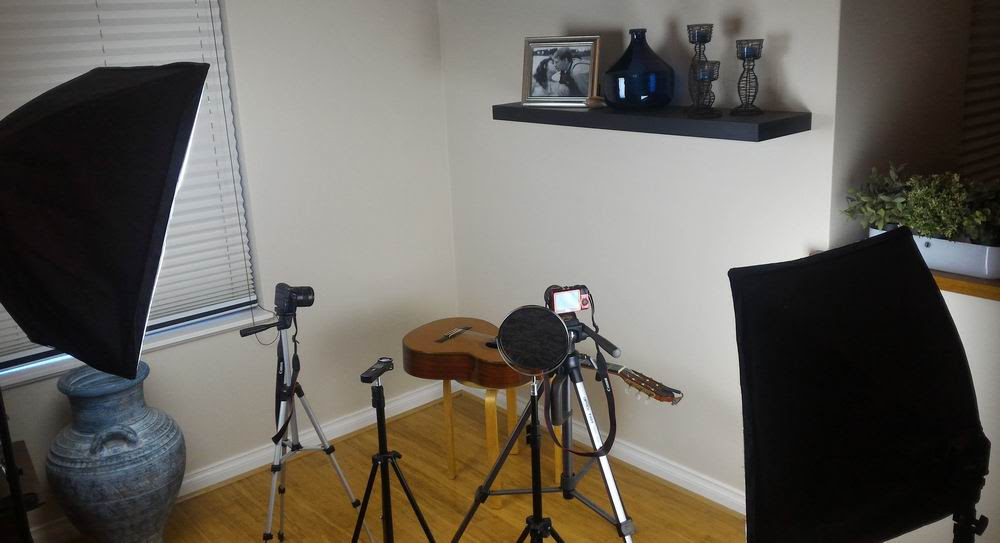 Email ThisBlogThis!Share to TwitterShare to FacebookShare to Pinterest
Labels: Recording