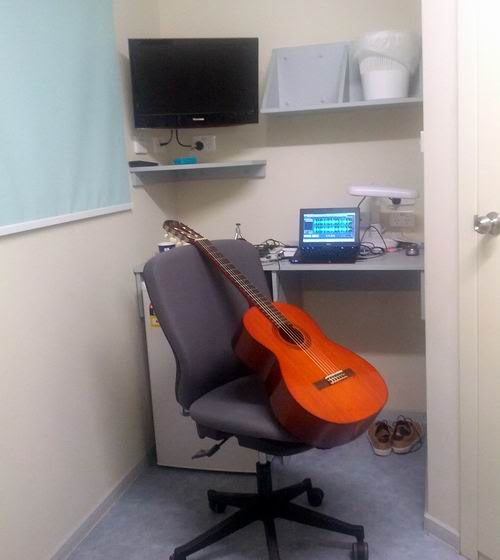 Well here I am at the end of my second two week stay in the tropics.  I thought I should upload something, so here you go!  I did bring up my video camera, but the room is too small, and the internet is too slow so it is audio only.  In fact I'm lucky to have internet at all at the camp - I use my netbook tethered to my mobile phone!

Anyway, some tunes and some stories perhaps?  These are all demos of what is to come, played on my $100 1974 banger, in a room I can nearly touch opposing walls, so be kind :)

First up, Lean on Me.  Pretty close to ready for production.  Tab is made, I play it ok, just not so smooth.  While I was sitting with the lads one evening have a beer with guitar in hand, Lisey said "can you teach me Lean on Me?"  I flicked the chords up, went the improvise, and behold, it was very simple!  Only about half a day invested in this one.  It is my "default" fingerstyle strummy drummy flicking pattern - beat 1 is a bass note, beat 3 is a flick/snare drum feel, the rest is squeezed in the gaps.  This is going to be a nice easy and reasonably popular tune.

I'd already played the intro to "Something so Strong" about a month ago and decided that would be a good candidate too.  My default fingerstyle feel again.  It's okay, I don't have too many songs that are this formula, so if I disperse this sort of feel throughout my setlist, nobody will write me off as a one trick wonder.  But for you, here is the same feel applied to a different song.  Note that I have worked out the solo and tabbed it, it just isn't into muscle memory yet so it was a bit off in this demo.

This I've been playing for a while, I've mentioned it before, Ulli Boegershausen's fingerstyle cover of "Mad World".  Excellent, haunting, highly recommended.

"Albatross" by the Peter Green version of Fleetwood Mac is an excellent chillaxing tune, Hansel Pethig did a super-cool improvisation on it a while back on youtube, I have had it noted for a while.  You will notice that I...just...can't...play slowly...consistently...  It's like I have a fixed speed and I always come back to it.  Sorry, but song is still in practise mode!

And finally, the start of "Money", one of the last songs to tackle in my epic Dark Side of the Moon project.  This is really raw, concept only.  Firstly I wanted something that said "fingerstyle" but also was cash registers/coins clinking.  I tried a few tings until I settled on something that flowed, in 7/4 timing, which is achievable and has a "feel".  Tap soundboard under soundhole, scrape upper soundboard, fingernail taps on top side, scrape again, clunk base of bridge, scrape up bridge, fingernail tap bottom, repeat.  I need to work on the "mesh", I don't want it to sound contrived, it must flow into the song.  But it still needs to be obvious what it is!  It may yet morph, and my playing of the song is very stiff, you can tell I've only just started...enough excuses, I don't mind sharing my half-baked concepts with you.  There's a few edit/cuts in this to make sure it was at least vaugely coherent.

There you have it.  Next swing is 3 weeks away, so nothing doing for a while.  Hope you found something interesting in my very hacky fingerstyle song concepts on my $100 banger.  Sorry about the G-string not being in tune, I only noticed when listening back, bleurgh...okay, enough with the excuses already :)