I am still playing from time to time at Deli Chicchi on a Sunday afternoon/evening. The owner Glenn believes in live music and good on him. Sure you can have your home theatre big screen blasting out a blu ray recording of The Eagles live, and you will get a great experience, but you weren't there "in the moment" and even though live music at a pub/cafe won't be quite the same grand experience, you will get "in the moment". Both experiences are great but here in my small city of Perth, people, as a generalisation, haven't (re-)discovered the joys of live music. So get out there!

I haven't recorded anything lately even though my computer game tune arrangement is ready to go and I have already played it several times in public. So nothing to report on that front.

A few times over the past few years I have spoken about finger pain, last year; in 2011, all the way back to 2010. The sad conclusion I've had to draw is that yes, if I go to hard on my left hand doing awkward fretting I am going to cause myself pain. Is it arthritis setting in? I don't think so. Am I managing the pain? Yes; just. It's a sad thing when you know you are capable of doing something but you shouldn't do it. So pulling back is a hard thing to do.

Stretching fingers/wrists and hands helps but it isn't a cure-all. I have some regular stretches I do while I'm at work and they increase how far I can do without busting into pain-and-damage land. Stretching during a long playing session, especially simply pulling your hands back at the wrist is a good idea. I have also been taking turmeric pretty much every day for more than a year now. Yes, the yellow spice; it is a natural and cheap anti-inflammatory. Mix a quarter of a teaspoon with water and down it, once a day in the morning. I've become accustomed to the taste, it grows on you. When I have forgotten to take it for more than a week I notice that I get into pain-and-damage land much sooner. So I'm giving it a tick and sticking to it.

I am going to catch up with a year 11 student at my kid's school sometime soon. I saw him once at a music show belting out some pretty good fingersyle; he has skills. I thought "I could show him some stuff, and save him from having to learn the hard way the past few decades what I have learnt." So I spoke to the music teacher and he introduced me. He seems keen, I will find out what his goals are and see if I can help him get there. It would be nice to be a "guitar mentor", I feel like I've got stuff to give. Life is big, and wide, and varied, and everything isn't about guitar. But at least the parts that are about guitar can be as worthwhile and fruitful as possible :-)

I've finally decided to move out of the 2000's and into modern day - I'm switching from Powertab to MuseScore. Why? It creates really nice scores to play from. I'm still transitioning so I might still do the grunt tab work in Powertab and then import it into MuseScore to finish it off. The tab entry process for MuseScore, which I have tested previously, is a bit different than Powertab, so it's going to take some getting used to.

What has finally won me over is how beautiful - and useful - the score sheet is. Here's an example, the current piece I am arranging, click on it to show detail. How good is that! 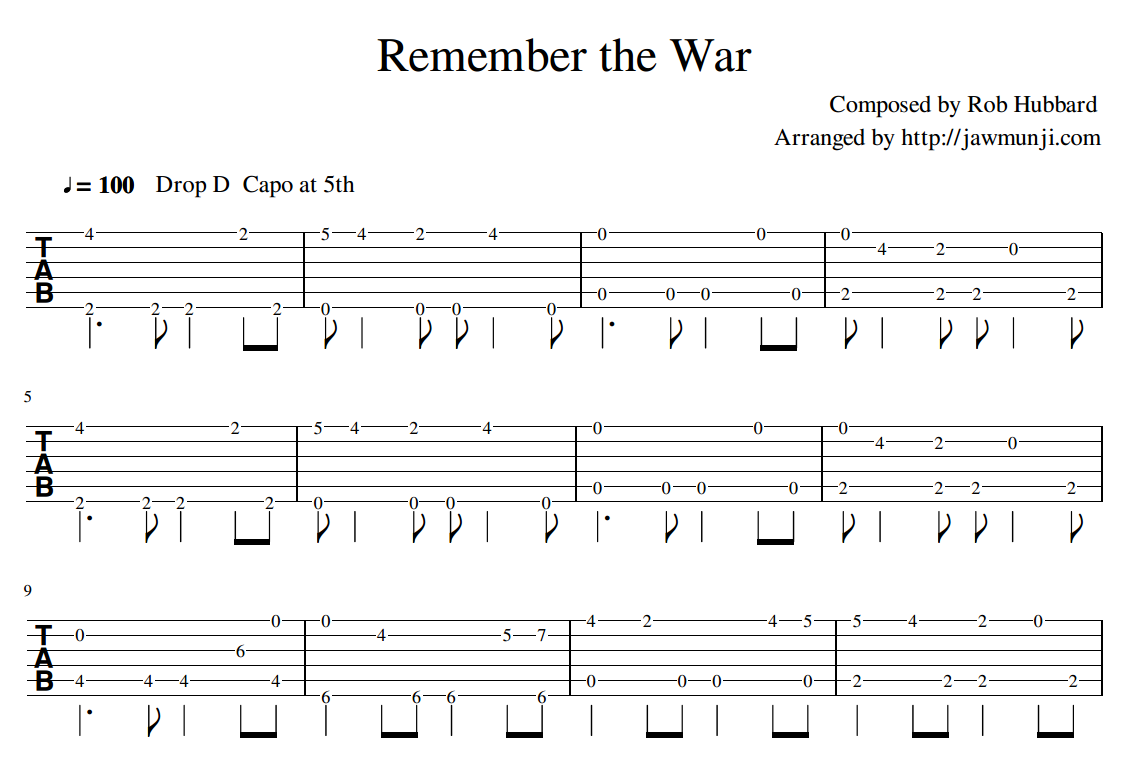 Now proper musicians will rightly balk at this, but here are my random thoughts about this presentation of the score:
So in this score I reckon I have the best of all worlds - string, fret, music tails to show note duration as well as duration spacing - and it's all presented in an easy to read fashion, with plenty of score per page!

Let me know what you think!
JAW
Posted by JAW on Thursday, September 08, 2016 No comments:

Recently I was working away again, and took up my main guitar.  Managed to get a lot of playing in, nothing new, just practise on the old stuff.  This turned out to be fortuitous; when I came back Glenn at Cafe Chicchi got in contact with me and I've been playing out there around every two weeks.  It's great to be out there playing and chatting to patrons again.  If you are ever in the Mount Claremont area, check on their webpage if I'm playing on the weekend, and stop by.  https://www.facebook.com/DeliChicchi/ Make sure you say hello!

I still have "The Chain" to record, I need to get the motivation to get on with it.  When you aren't recording, it gets easier to keep not recording.  If you know what I mean.  Great song, I've done a pretty good job with it if I do say so myself, I'm looking to get it out to you.

I also need to finish making my little guitar USBs.  Did I mention it to you?  I get asked from time to time "where's your CD?" Well, CDs are pretty olde school, I decided I could do better than that, so I bought a batch of USB sticks in the shape of a little classical guitar.  They were around $5 each, 8GB flash, they are a very cool shape although it would have been better if they were hard plastic rather than flexible plastic, but no matter.  I plan on filling them with all my MP3s, sheet music, videos, lessons, and anything else I've ever created.  Most of it is available here, but not the raw videos, so you are getting something you can't normally get.

I was thinking $20 each, and the offer that if you ever see me again, I will swap it with the latest revision.  Each time I make new stuff I will update it.  And I will sign/initial each one.  And you get to talk to me when buying it! :-)

Why Can't This Be Blog?

Not much activity recently but two songs are ready to record - Shine and The Chain.  Pretty happy with both; I'm going to get my wife or daughter to do the recording rather than just tripod up a fixed camera position.  So:

So it's more of a "music video" for the song than a recording of me playing the song.  If you know what I mean.  I did it previously for Get Back and I reckon that is one of my more memorable videos of recent times.  Next time I will go hand held camera rather than various fixed position angles, seems to have been a popular style of videography for a while.

Meanwhile, true to form, I stumbled across another song "I just had to do".  Van Halen, "Why Can't This Be Love", classic 1986 right when I was into popular music.  During the late 90's I made my engineering team listen to this song non-stop for about 2 hours during a pretty intense phase of a project, partly because I still loved the song, partly because when I pressed stop they would realise that intense work is better then intense work + non stop Van Halen, and partly because of the bestest stupidest line in a song ever: "Only time will tell if we stand the test of time."

First song after Lee Roth left, by Sammy Hagar.  I've still got the bridge to finalise but the rest is mostly done, just gotta get it playing cleaner.  Here is me Hagar'ing it:

Heh, I had to giggle at that title.

I recorded a video tutorial on a song I'm working on, Collective Soul "Shine". I can play it well enough to do a tutorial. I also recorded it using my new three point lighting system that I purchased from ebay late last year for around $AUD150 (2015). I had been looking for an excuse to use it. All my videos for too long have had bad lighting. Well no more!

Definitely an improvement, but more learning required. Firstly, don't position the light so that it reflects off the guitar into the camera. Try not to have such a blotchy red face. Don't illuminate the solar panel on top of my head too much. Oh well, can't help much of that. Makeup? Nah, that's going too far.

Here's a photo of my set up. In a room currently full of junk, I was using a backdrop but it wasn't flat enough and was catching shadows so I stuck with the wall. Things to note: 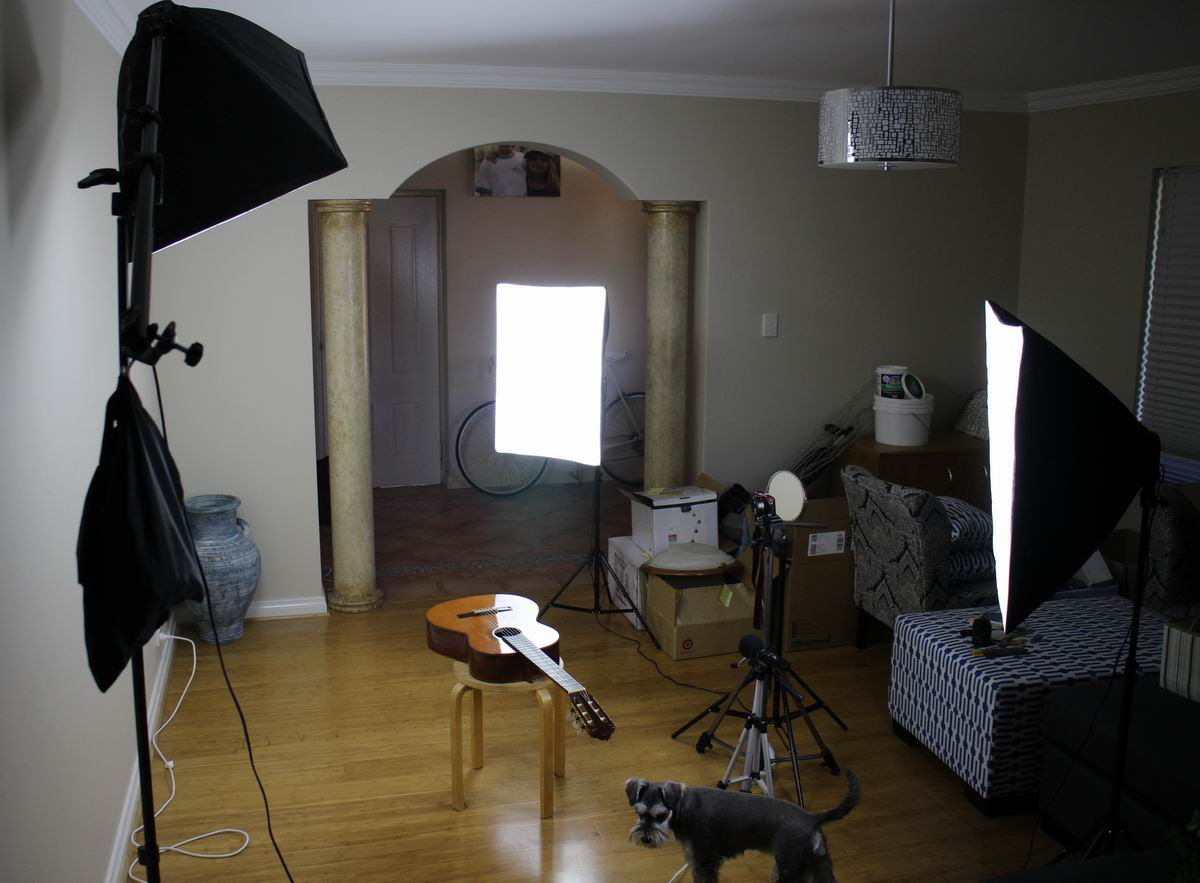 Now as for the video, I've kept it shorter than my usual waffle and just got on with it. Enjoy some gen-u-ine Aussie accent. Look it's a great song, give it a crack. Why have I hit the grunge? Dunno, but it is the second grunge song I've done recently.

Here's the video, tab in ASCII follows. I will post the pdf when I get the song recorded for real. Enjoy!